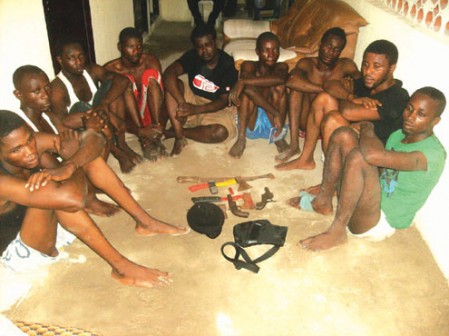 News Agency of Nigeria reports that the Nasarawa State Police Command has arrested 11 persons suspected to be members of a secret cult, the

The Police Public Relations Officer (PPRO) of the command, Mr. Michael Adah, disclosed this to journalists on Tuesday in Lafia.

He said the suspected cultists were arrested on Sunday at Tudun Kauri, a surburb of Lafia, following reports of incessant criminal activities in the area.

He said that during a raid on the hideout of the suspects by the police, various dangerous weapons including, clubs, machetes, knives and axes were recovered.

Adah disclosed that the suspects were being interrogated at the Criminal Investigation Department (CID) of the command and that, if found culpable, they would be prosecuted accordingly.

He charged members of the public to cooperate with the police by providing useful information that would lead to the arrest of criminals and rid the state of criminal elements.

“Effective policing is a collective responsibility of all law-abiding citizens.

“People should always be alert and report any suspicious movement in their neighbourhood to law enforcement agents as that piece of information could avert crime and even save lives, ” Adah added.