Home General News World news 11-Year-Old Flies to Rome With No Ticket, No Money and without Family
Facebook
Twitter
WhatsApp 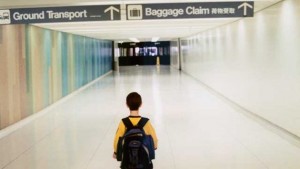 Authorities are investigating how a solo 11-year-old boy boarded a plane from Manchester, U.K., and arrived in Rome, Italy, with no money or documentation.

The Jet2.com flight departed the Manchester airport Tuesday with the boy onboard. He went through five security checkpoints undetected, an airport spokeswoman confirmed to ABC News. Despite having no boarding pass at security, no boarding pass at the gate, no passport and no boarding pass stub once on the plane, airport workers failed to notice the boy was on his own. Even a headcount onboard the flight failed to detect the child.

Jet2.com is a low-cost U.K. airline that flies to 53 destinations in Eastern and Western Europe.

Staffers have been suspended, pending an investigation.

The Guardian newspaper reports the boy ran away from his mother on Tuesday while she was shopping close to the airport. He apparently made his way to the airport on foot.

Once there, he followed another family through the checkpoints and onto the plane.

On the way to Italy, passengers alerted airline crew to the boy. The captain then notified police at Manchester airport, who alerted the boy’s mother that he had been found. The boy’s mother had reported him missing.

The boy stayed onboard the aircraft once it landed in Rome, according to the newspaper. The other passengers deplaned while the boy was questioned. He remained on the flight, which returned to Manchester, where he was reunited with his mother.

John Greenway, a spokesman for Manchester airport, told the newspaper: “We know that people are not very happy about it. The investigation will look at how this has happened. Jet2 will be looking at how this boy got on that aircraft.

“He’s evaded checks. He did go through the metal detector and didn’t sound any alarms. He wasn’t a danger to any of the passengers.”