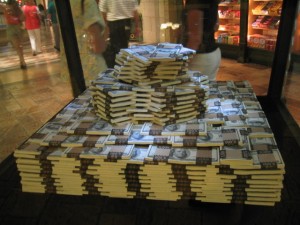 The cash was said to have been deposited into the strong room No 1 of the Central Bank of Nigeria, CBN, on April 26, 2007, by officials of the Economic and Financial Crimes Commission (EFCC) under the instructions of the former boss of the commission Nuhu Ribadu.

The money was said to have been given to the EFCC as bribe by former Delta State Governor James Ibori through an agent. However, Ibori has since denied giving the cash to either the EFCC or any of its officers.

Thus, the Federal Government, via an ex-parte originating summons it filed in court on Tuesday has requested the Abuja Division of the Federal High Court to order the immediate forfeiture of the $15 million allegedly given to the Economic and Financial Crimes Commission, EFCC, by the jailed former governor of Delta State, Chief James Ibori, as bribe.

According to the FG’s, they are requesting “an interim order forfeiting the sum of $15,000, 000 (Fifteen million dollars) being an unclaimed property in possession of the Central Bank of Nigeria, to the Federal Government of Nigeria pending the publication and hearing of the motion on notice for the final forfeiture order of the said property… an order of this honourable court directing the publication in any national newspaper of the interim order under relief one above, for anyone who is interested in the property, to appear before this honourable court to show cause within 14 days, why the final order of forfeiture should not be made in favour of Federal Government of Nigeria.”

Therefore, the judge hearing the case, Justice Gabriel Kolawole, maintained that if by September 17, 2012, no one showed up to lay claim to the money, the $15 million bribe would be forfeited to the Federal Government.

Below is an excerpt of an affidavit by Bello Yahaya who was one of the investigators assigned by the EFCC to investigate the criminal case against Ibori EFCC official present at the hearing, about the genesis of the money:

“while the investigation was going on, on 25th April, 2007, Mallam Nuhu Ribadu, the then Executive Chairman of the EFCC called the investigation team headed by Mr Ibrahim Lamorde the then Director of Operations, to pick up cash in the sum of USD 15, 000, 000. 00 (Fifteen Million Dollars) given to him and the Commission through an undisclosed agent of the said James Ibori.

“That upon picking up the said USD 15, 000, 000. 00 (Fifteen Million Dollars) we deposited same on 26th April, 2007 with the Central Bank of Nigeria which was duly acknowledged and signed for by one M.M El-Yallud, a staff working in strong room 1 of the CBN.

“That from the said 26th April, 2007, the money remained in the custody of the CBN till date. The issue of giving bribe was raised by me in my affidavit sworn to on 9th January 2008 in opposition to James Ibori’s bail application when he was eventually charged to court for Money Laundering Offences.

“James Ibori denied through his reply to counter affidavit dated 10th January, 2008, of giving the sum of USD 15, 000, 000. 00 (Fifteen Million Dollars), to EFCC or its officials. That ever since April, 2007, no one has claimed ownership of the said sum and it has since remained unclaimed money in the strong room of the CBN.

“That the said sum if left untouched and unspent in the state it was kept in the strong room since April, 2007, may eventually be destroyed, defaced, mutilated and become useless.