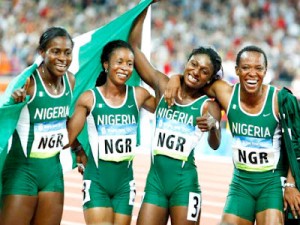 Three Nigerian athletes already in London preparing for the Olympics have tested positive to banned drugs.

Although the Athletics Federation of Nigeria (AFN), declined to name the affected athletes yesterday, independent sources confirmed that Vivian Chukwuemeka, Lauretta Ozoh and Regina George were those who samples tested positive to banned substances.
The informed National Sports Commission source also revealed that already, the leadership of Team Nigeria camp in Surrey, England has been informed and ordered to decamp the affected athletes immediately.

“Team Nigeria officials in Surrey, England have been informed to decamp the affected athletes immediately,” revealed the source.
But one of the affected athletes, Chukwuemeka who is just returning from a two-year ban for a similar offence has called for the result of the test carried out on her at the African Championship in Port Novo, Benin Republic to ascertain if there was no attempt to implicate her with the result of the Nigeria Olympic trials a week earlier in Calabar.
“Chukwuemeka who knows that if this result is true, she will get a life ban from IAAF has called for the result of her dope test at the African Champion. If that one is negative then, it means something is wrong somewhere. But if it also tests positive, that is automatic life ban for her, ” revealed the informed the top NSC source.
Ozoh may also share Chukwuemeka’s fate as a second offender. Only George may get a lighter ban as a first time dope offender.