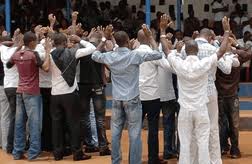 Reports have it that Six people have died, including a popular UNIBEN graduate, Nosa Ebohon aka Biggie, following a cult war supposedly between Eiye Fraternity and Black Axe members of the school.

Nosa and the other five were killed at different locations in Benin last week. He was said to have been gunned down on Friday night at a beer parlour along Adolor College Rd.