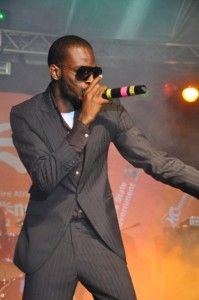 Alapomeji record boss 9ice has been signed on a new music label, Diesel music as one of its artistes. An industry source who confirmed this, said that the deal was signed not too long ago between 9ice and the record label owned by Nino. Diesel music already has Shyne and Smoothy as artistes on the label. 9ice has already done some music collaboration with these artistes, and some of the singles will be hitting the airwaves in few weeks time.

9ice who was recently seen acting a lead role in Laide’s Bakare movie ‘Jejere’,  has sacked his long time manager and friend  Dehinde Fajana few months ago, and since then has being struggle to keep his career at the top. Perhaps this new deal will be the beginning of better things to come for the Gongo Aso singer, time alone will tell.