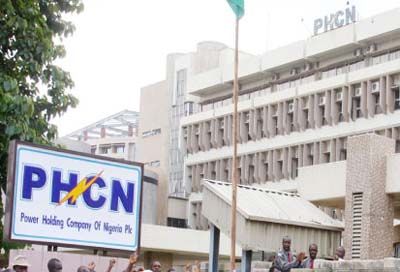 A transmission station, belonging to Power Holding Company of Nigeria (PHCN) have been shutdown by the Ogbunabali community in Port Harcourt Local Government Area in Rivers State over epileptic power supply.
The affected area is the Port Harcourt Town transmission station, located in Nzimiro Street. The angry residents said they were carrying out what they called, peaceful protest. To drive home their point, the protesters stormed the PHCN office with various fetish objects, including palmfronds, black fowl, which they tied to the palmfronds, leaves and tied them to the gate of the transmission station.

When the PHCN office was visited by the reporters, the protesters were also seen roasting chicken in front of the gate.

One of them said the traditional objects placed at the gate of the company were symbolic, adding that PHCN would appease the gods before opening the gate The reporter also saw leaders of the community and representatives from PHCN in a dialogue session, on how to resolve the matter. The Councilor representing Ward 2 at Phalga, Hon. Henry Woke, told staff members of the company that their peaceful disposition in the past had been taken for granted.
He explained that the community had been demanding to be separated from the feeder pillar it sharwith other neighbouring communities.
Woke, the protesters’ spokesman, stated that they had perpetually remained in darkness due to the inefficiency of PHCN. He said:“We are not ignorant of the epileptic power supply in the country. But, our problem here is PHCN has failed to perform their basic responsibility. Some areas are having steady light, especially Government-Reserved Areas (GRA), Government House axis. The other part of the community suffers light problem.
According to him, the people had made several efforts to solve the problem, but the company had failed. “Remove us from where we are jointly put with Nkpogu, D/Line, Aba Road axis, Amadi-Ama and Elekahia. For the past five months, we have been running over the same issue without result. The natives also accused the company of not installing a transformer they purchased, saying that it was not their responsibility to buy materials for PHCN.

Meanwhile, the company’s representatives led by Emeka Onochie, Head, HSE Department, appealed to the protesting natives to give them a few days to respond to the demands. However, the two parties had scheduled a joint meeting for Tuesday.