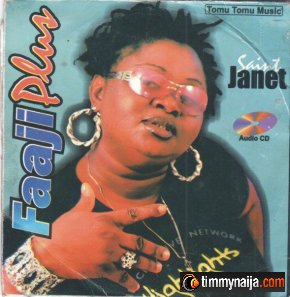 St. Janet is a relatively new Nigerian singer of Yoruba extract. She is quite popular among the Yoruba-speaking people all over the country, especially due to her songs which are riddled with ribaldry. This is the main reason why her album, released 2010 was immediately banned by the Music Advertising Association of Nigeria (MAAN) and the leadership of Performing Musicians Association of Nigeria (PMAN) placed a ban on the album.

However, this might be the very reason why the organizers of the 2012 edition of the Osun Oshogbo Festival have included the artiste as one of those to perform at the festival.

It might however be of relevance to intimate readers about the Osun Oshogbo Festival. The festival is an annual event held to celebrate the essence of Osun goddess which is the divinity of rivers, love, feminine beauty and fertility. The festival is held at the Osun Grove, a site whisc has since been lifted to the status of a World Heritage Site by UNESCO; a status which it shares with only 961 other sites all over the world (with just one of those in Nigeria).

The organizers must have believed that the music of St. Janet – which some consider as highly immoral – has some relevance to the essence of the Osun goddess to include her in this year’s edition. Meanwhile, it is unlikely that her renditions will make any sense to the majority of foreigners who will be attending this year’s festival.