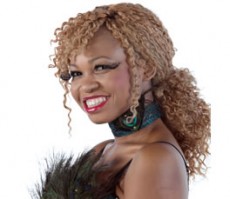 In the StarGame jungle, it’s survival of the fittest. For yesterday’s Head of House Task the Housemates faced a test of endurance.

The StarGamers headed out in the garden where they found markers to indicate where to stand and pom poms waiting for them. The challenge was for each Housemate to stand still by their marker and to hold up a pom pom in each hand at a 90 degree angle.

Interestingly, the first Housemate to taste defeat was Prezzo just a day after the Kenyan vowed to win Head of House in order to get rid of Keagan. Better luck next time Prezzo. As for Keagan, after weeks of dominating in the challenges today the South African’s lucky streak finally came to an end.

All of that yoga that Goldie practises finally came in very handy today as the Nigerian maintained a Zen approach to this particular challenge and while the men struggled to cope the songstress did not even break a sweat. After Biggie announced her as the winner the excited performer did a little victory dance.

Congrats Goldie, it will be interesting to see how the dynamics in the House change now that it is one of the original Upvillers that has the captain’s badge and what does this mean for Keagan’s future in the Big Brother House now that he now longer exempt from Nomination.