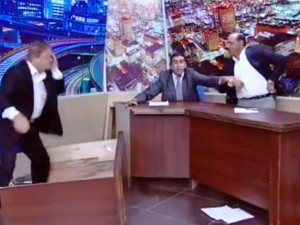 Nigeria has definitely had her fare share of rascals in our National Assembly over the years – from those who throw chairs to those who deal out slaps to their fellow house members at will – however, never has it been on record that a politician pulls out a gun on a political opponent during a debate, let alone on live TV.

However, that’s exactly what happened recently live on Jordanian television, as MP Mohammed Shawabka got so infuriated during a debate with his opponent, activist Mansour Sayk al-Din Murad that he threw his shoe at the man before drawing a six-shot revolver and pointing it at him.

According to The Guardian, Shawabka is accused of being a Mossad agent by the man opposite and takes exception, first throwing his shoe before drawing his pistol. The frantic scenes all took place live in a studio in front of a shocked crew and the host of the show, Mohammad Habashneh.

Habashneh at first tries to restrain Shawabka before Murad himself confronts the armed politician. The confrontation continues as the credits roll and the program ends. Fortunately, after much shouting and suit-pulling, Shawabka was calmed down and no shots were fired and no one hurt. Talk about reality TV!

To watch video click on the link: Jordanian MP Throws Shoe, Then Pulls A Gun On Political Rival During TV Debate