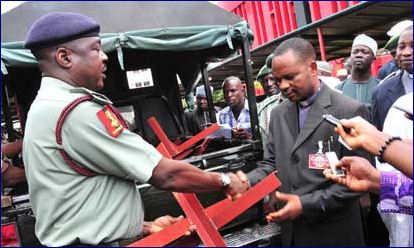 The Nigerian Army in its quest to find local solutions to the menace of Boko Haram, has unveiled and presented vehicle stoppers to some Churches and Mosques, Thursday.

Presenting the device in Abuja, the Chief of Civil Military Affairs, Major Gen. Bitrus Kwaji said the vehicle stoppers were designed to stop any vehicle from all angle at any speed.

He added that the anti-bombing device would be distributed to the representatives of Christian and Muslim bodies, who should in turn produce it in mass for distribution, while stressing that security is everybody’s business.

“it has been discovered that most attacks of suicide bombers are being carried out with vehicles loaded with Improvised Explosive Devices (IEDs). The mode of operation is simple as a suicide bomber drives his vehicle straight into his target and explosion occurs,” Major Gen. Bitrus Kwaji said.

“In order to disallow bombers from reaching their targets, this invention comes in handy as it forcefully stops any vehicle that comes in contact with it at whatever speed.

“The unfolding security challenges confronting the nation amongst which is the Boko Haram terrorist menace have continued to hinder the congress of the transformation agenda of Mr President as well as the development of the nation at large.

“The terrorists over the years have continued to attack places of worship (churches and mosques) in order to destabilize the nation. This has necessitated the Chief of Army Staff (COAS) to charge all corps and services of the Nigerian Army to provide ways and means of curtailing this menace.

“This charge has yielded a lot of responses as we witnessed the commissioning of an indigenous Armoured Personnel Carrier (APC) by the Commander-in-Chief of the Nigerian Armed Forces during the recently concluded Nigerian Army Day Celebration in Kaduna.” The Major General added.

“It is the hope of the COAS, that all hands be on deck to safeguard the lives and property of law-abiding citizens in the country, as I am to remind you that security is everybody’s business,” he said.

The Head of the Engineering Team that produced the latest device  who also the Director of Policy, Nigerian Army, Maj-Gen Richard Chioba, explained that the equipment will help reduce car bombings.

Chioba who also led the engineering team that manufactured the first indigenous APC assured the gathering that the innovation will help forestall and immobilise vehicles used for suicide bombings, especially at worship centres.

He said: “In order to disallow bombers from reaching their targets, this invention comes in handy as it forcibly stops any vehicle that comes in contact with it at whatever speed.

“This is the second innovation of the Nigerian Army in its effort to stop the menace of terrorist activities in places of worship.”

Receiving the devices on behalf of the Religion Bodies, Very Rev. Monday Okonkwo of the Methodist Church, Nyanya and the Executive Secretary of the National Mosque Abuja, Alh. Ibrahim Jega expressed satisfaction with Military Authorities, just as they promised to be security conscious, to complement the efforts of security agents, in riding the country of terrorism”.

They also called on faithful to join hands with authorities in their various churches and mosques, to prevent any further attack, and report any suspicion to the relevant authorities, insisting that, government can not do it alone.