Home Metro News Boko Haram: Jonathan under Pressure from US as a Nigerian Embassy Gets...
Facebook
Twitter
WhatsApp 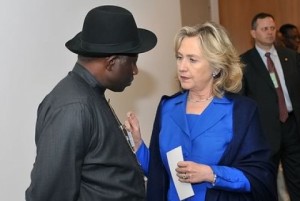 President Goodluck Jonathan is coming under intense pressure, especially from the Unitted States, concerning the threat posed by the dreaded Boko Haram sect. President Jonathan will be expected to take firmer steps towards ensuring security of lives and property in the country.

The US Secretary of State, Hillary Clinton, is said to have asked for a meeting with President Goodluck Jonathan early next month, when she will be visiting Abuja. And, Informed US sources have disclosed that the menace of Boko Haram is one of the issues that, the secretary of state is looking to discourse personally with President Jonathan.

This development is coming about the same time as indications emerged that the religious sect had issued fresh threats to a Nigerian High Commission in an undisclosed Southern African country. The sect is threatening to attack if the authorities failed to comply with demands which are not clearly stated. The threat was made via an email sent to the High Commission.

Information has it that the High Commission has since “transmitted” the matter to the Ministry of Foreign Affairs in Nigeria and that officials “are taking the threat very seriously,” by observing safety and security measures. The email was said to have made some vague reference to certain “compensation” without which the sect promised that what happened to some media houses in Nigeria would befall the Commission.