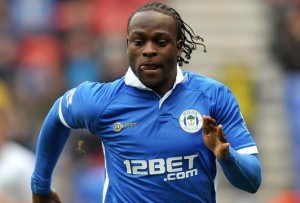 Nigeria star Victor Moses is set for a showdown talk with manager Roberto Martinez as Wigan continue to block his move to Chelsea.

Wigan have so far turned down three bids for the winger, the latest being a £6.5m offer.

Moses therefore wants to talk to the club manager to lay bare his mind on the dragged transfer to ‘The Blues’, according to the Daily Mail.

The dazzling winger is set for the talk before Chelsea present a £9m bid, which has been described as their final for the Nigeria youngster.

Moses has his heart set on the move, but Wigan insist he can only go for £10m as 20 per cent of the profit will go to his former club Crystal Palace.

The Nigeria winger has been involved with Wigan in pre-season training in Austria.

He still has a year left on his contract with club chairman Dave Whelan urging him to stay on as he still has a lot to learn under Martinez, who has for the second straight season guided the modest club to hang in there in the English Premier League.

Wigan would still cash in on a Moses’ transfer at the end of the coming season because he is still under 24 years.