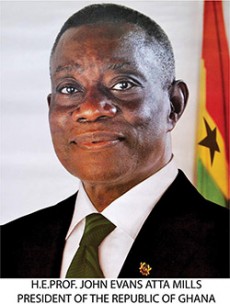 He was the third and current President of the Fourth Republic of Ghana and was inaugurated on the 7th of January 2009, having defeated the ruling party’s candidate Nana Akufo-Addo in the 2008 election.

He was Vice-President from 1997 to 2001 under President Jerry John Rawlings, and stood unsuccessfully in the 2000 and 2004 presidential elections as the candidate of the National Democratic Congress (NDC).

He recently returned from a nine day medical check-up in the United States.

Prior to his trip to the U.S of A on June 16th, questions had been asked about the whereabouts of the president after he had not been seen in public for close to two weeks whilst communal violence ravaged parts of the country.

After a successful routine medical checkup in New York, H.E the President of the Republic of Ghana arrived home at about 12:45pm on Monday 25th June, 2012 to a rousing welcome.

Before his departure to the USA, President Mills quashed rumours of his death when he addressed the media. He also stated that he is going for a “routine check-up” and will be “away for a few days.”

In a formal notice to Parliament, President Mills said he will be away in the US until June 25, 2012.

Details of the Presidential notice were read to MP’s during Tuesday’s sitting of the House by the first Deputy Speaker, Hon Edward Doe Adzaho, who presided over proceedings.

The President’s letter read: “In accordance with Article 59 of the Constitution of Ghana, I write to inform you that I shall be away in the US from Saturday, 16 June to Monday 25 June, 2012 for a routine medical check-up.

“During my absence the Vice-President of the Republic of Ghana, H.E John Dramani Mahama, shall in accordance with Article 60 (8) of the Constitution act in my stead. Kindly accept, Right Honourable the assurances of my highest consideration.

President of the Republic of Ghana.

This was his last letter to parliament prior to his “routine check-up” in the United States of America.