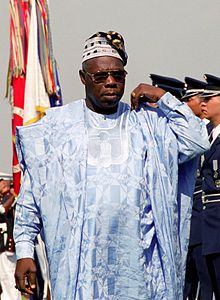 Ogun State had their Local Government elections on Saturday, and the election was reported to have been characterized by low voter turn-out among other dramas, as typical of an average electioneering process in the country. There were reports of irregularities and pockets of violence as well as ballot snatching and alleged killings.

However it also reported that the elections were boycotted by some prominent members of the society such as some members of the National Assembly (both Senate and House of Representatives) from the state.

But the most prominent actor missing action was none other than former president Olusegun Obasanjo, who, besides failing to show up, it was reported that his name was missing on the voters’ register at Ward 11, Unit 15 where he was supposed to cast his vote in Abeokuta.

Meanwhile there were also reports that the former president was spotted at the wedding of Hip hop act, Naeto C. it would be recalled that the artiste’s mother was a minister in Obasanjo’s cabinet.