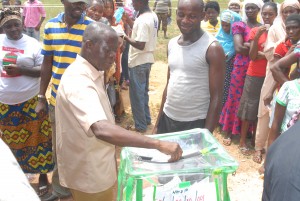 The Edo state governor, Adams Oshiomhole on Saturday said that he is disappointed in both the Chairman of the Independent Electoral Commission (INEC) and the electoral body for failing in their responsibility to conduct a free poll in the state.

The governor warned that there will be trouble if the true winner of the election is not declared.

Mr Oshiomhole who disclosed this during an interview with journalists at the Iyamho primary school, Iyamho, Etsako West Local Government Area said there can be no winner when the people are not allowed to vote.

“They plan not to bring out the voting materials on time and as we speak in Oredo Local government area, Benin City and Egor local government area, the heart of Benin City materials have not gotten to majority of the polling booths after 11 am and at the New Era college, upper mission road, they brought fake voters register different from the one the people registered,” he said.

“If accreditation is to stop by 12pm and by 11am, it is after 11am now, there are no materials in some polling booths, it then means Professor Atahiru Jega and INEC have no plans to conduct election. The whole idea is to frustrate the people so that they will not be able to vote, and they will declare a fake result.

“Professor Jega and INEC have been an embarrassment to the nation. I am in shock with all the arrangements they have made sensitizing the people, and I told them, INEC need to be sensitized. INEC is the weakest link in the Nigeria democratic chain. I have no faith in what INEC is doing in Benin City.

“This is designed for where majority of the people are denied the right to vote and this time around I have told them this country either decides on whether to move on or move back, I see sponsored editorials saying whatever happens we will go to court, but today we have to sort out the issues once and for all,” Mr Oshiomhole said.

The governor further said he would hold the INEC Chairman responsible for the failure of the election and for disenfranchising the people as INEC has connived with the Peoples Democratic Party to involve in scientific rigging.

“They planned it and executed it this way. It is a shame that they have programmed this to embarrass the Nigeria nation. If INEC do not allow the people to vote and they pronounce the winner there will be trouble.

“Fifty five percent of voters are in Edo South and forty percent in Benin City, and they think they can deprive the people the opportunity to vote.

“Professor Jega has failed because I wrote a petition that they are buying voters card. We will all go to court before God. They know that if it is two people remaining they will not vote for them”

The Peoples Democratic Party (PDP) has described Mr Oshiomhole’s condemnation of the governorship election in Edo, while the accreditation process was still on, as hasty.

The Director of Publicity of the PDP in Edo State, Okharedia Ihimekpen accused the governor of frantically attempting to destroy the integrity of the election.

Mr Ihimekpen said that the governor has seen the writing on the wall and is trying to raise the alarm in order to rationalize his eventual defeat at the poll.

The PDP is also said that the governor has suddenly realized that “the security and the electoral body are insisting on accreditation of voters whose names are in the voter registers in line with the one man, one vote mantra.”