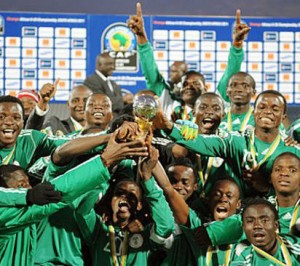 Eighteen members of the Nigerian U-17 team have been ordered out of camp for failing the Magnetic Resonance Imaging (MRI) test conducted to verify their ages. The affected players were screened out during the Grade 1 test ordered by FIFA for all the countries that will participate in CAF/FIFA age grade football competitions.

Demola Olajire, the Media Officer of Nigeria Football Federation (NFF),confirmed the development on Friday. According to him, “The NFF conducted MRI tests for the players presented to us by the coaches as U-17. The players failed our MRI test and they are out of the Golden Eaglets team… So, we are looking for new players now, but Nigerians should note that we are not the parents of these players.”

The issue of age falsification is a common thing in the Nigerian football environment. The country has in the past, faced many accusations of fielding over-age players in age-grade competitions. Meanwhile, in his reaction to this development, former coach of the Flying Eagles, Tunde Disu, has advised Coach Manu Garba and his assistants to go back to schools in order to select new players ahead of their Africa U-17 qualifying series, which kicks off in September.

In the words of Disu, “I don’t see this incident as a disgrace; rather it’s a wake-up call. Nigeria still has time to amend the situation… Let the coaches go to the academies and schools to scout for players who are within the age limit. I think the MRI test introduced by FIFA will force Nigeria and other African countries to go back to the grassroots to pick true U-17 players.”