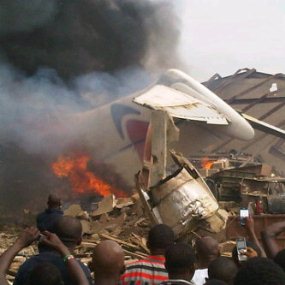 The Federal Government on Thursday released the preliminary report of the Accident Investigation Bureau (AIB) into the possible cause of the Dana airline which crashed last month in the Iju Shaga area of Lagos State, killing all 153 passengers and six crew members on board.

The Chief Executive Officer and Commissioner of AIB, Capt. Muhtar Usman, under whose auspices the investigation was conducted, said the plane crashed because of complete loss of power from its two engine, while approaching the Murtala Muhammed International Airport, Lagos.

The report signed by the commissioner/chief executive officer, AIB, Capt. M. Usman, said that the cockpit voice recorder (CVR) recovered from the black box revealed that the pilots mentioned it in a discussion but did not voice concerns that the condition would affect the continuation of the flight.

“The CVR retained about 31 minutes of flight and starts about 15:15 at which time the captain and the first officer were in a discussion of a non-normal condition regarding the correlation between the engine throttle setting and an engine power indication. However, they did not voice concerns then that the condition would affect the continuation of the flight.”

The report said that the pilots continued to monitor the condition while maintaining contacts with the control tower which issued the plane final heading to intercept the final approach course for the runway.

“During the period of 15:37 and 15:41 the flight crew engaged in pre-landing tasks including deployment of the slats, and extension of the flaps and landing gear. At 15: 41:16 the first officer (FO) inquired, ‘Both engines coming up?’ and then the captain replied “Negative”.

“At 15:42:35, the flight crew lowered the flaps further and continued with the approach and discussed landing alternatively on runway 18L. At 15:42:45, the capt reported the runway in sight and instructed the FO to raise the flaps up and 4 seconds later to raise the landing gear.

“At 15:43:27 hours, the Capt informed the FO, ‘We just lost everything, we lost an engine. I lost both engines’. During the next 25 seconds until the end of the CVR recordings, the flight crew was attempting to restart the engines,” it stated.

However it appears that investigations might not be conclusive after all as the much-awaited reports from the flight cockpit data recorder was not available because it melted in the fire that engulfed the plane after the crash.

According to the AIB commissioner, “The two flight recorders, the cockpit voice recorder (CVR) and the flight data recorder (FDR) were analysed at the facilities of the National Transportation Safety Board (NTSB), Washington, D.C., USA.

The report revealed that a review of the technical log of the Boeing MD-83 plane manufactured in US did not indicate any condition that could result in the crash.

It said: “A review of the aircraft technical logs of the previous 30 days did not indicate a condition. The airplane had last undergone maintenance on 1st June 2012, and after a return to service flight on 2nd June 2012, it was operated on four revenue flights (two-round-trips between LOS and ABV) and another four flights on 3rd June 2012.

“The airplane was on the fourth flight segment of the day, consisting of two round-trips between Lagos and Abuja.  The accident occurred during the return leg of the second trip.  DAN 992 was on final approach for runway 18R at LOS when the crew reported the total loss of power.”

“Future investigative activities will include the detailed examination of the engines, further testing of fuel samples, continued factual gathering of relevant historical, operational, maintenance and performance information of the accident airplane.

“In addition to other similar airplane models, further development of the background of the flight crew, further analysis of the CVR audio recording and review of pertinent issues associated with regulatory oversight,” it added.