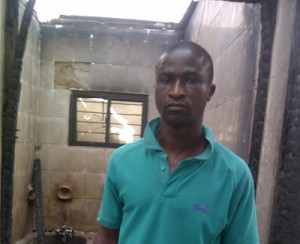 It was reported that early this morning a fire razed to the ground the Ibadan duplex of ex-Barcelona and Eagles star Gbenga Okunowo.
A devastated Okunowo said his house was completely razed to the ground by a fire which came from the NEPA office premises next door to his house on Ring Road in Ibadan.
‘My whole house is gone. Even the clothes, boxers and slippers I’m wearing now were given to me by friends,’ he lamented.
Things that were said to have been lost in the fire are his passport, his European residence papers, medals, trophies and other properties. The fire was said to have started around 2.30am today from the NEPA compound next to his house.