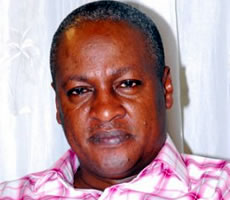 ACCRA — Ghana’s John Dramani Mahama, sworn in as president on Tuesday following the sudden death of John Atta Mills, says he was forever changed by his boyhood experiences during a 1966 military coup.

The 53-year-old who had been vice president was born in Bole Bamboi in northern Ghana and holds degrees in history and communications, according to Ghanian media.

He served as a diplomat in Japan in the early 1990s before returning to Ghana, where he was first elected to parliament as a member of the National Democratic Congress (NDC) party.

He later became the chairman of the West Africa Caucus at the Pan African Parliament in Pretoria, before deceased president Mills tipped him for the vice presidency.

Mills died on Tuesday at a hospital in Accra following an unspecified illness.

Mahama, according to a recently published memoir, grew up as a child of privilege.

In the book, “My First Coup d’Etat — And Other True Stories from the Lost Decades of Africa,” he describes his experiences at an elite boarding school in the capital Accra, where he was drilled in the customs of Ghana’s former colonial power, Britain.

“The history and prestige (of the Achimota boarding school) did not stop me from hating it,” he wrote.

In the book’s first chapter, he vividly recalls the day in 1966 when he learned Ghana’s founding president Kwame Nkrumah was ousted in a military coup.

“When I look back on my life it’s clear to me that this moment marked the awakening of my consciousness. It changed my life and influenced all the moments that followed,” he wrote.

His father, who served as junior minister in Nkrumah’s government, was briefly detained and interrogated by the coup leaders.

Mahama described his journey around Accra, accompanied by an official from his school, in search of his father, who was later released unharmed.

“I felt, as children often do, that my family and I were somehow shielded, automatically exempt from anything tragic,” he wrote in the book.

He recently told the US National Public Radio that his childhood was heavily influenced by American cultural icons, including James Brown and the Jackson Five.

He served as the west African nation’s communication minister from 1998 to 2001 and as the spokesman for the NDC between 2001 and 2004, when the party was in opposition, according to local media.

He takes over a nation of some 25 million people, lauded for boasting some of the strongest democracy credentials in Africa, which has recently become a significant oil producer.