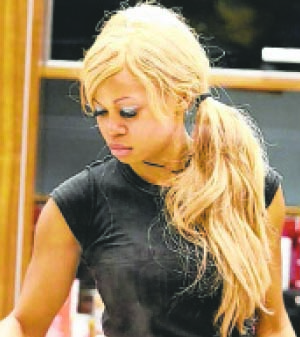 Nigerian Singer, Goldie Harvey, has apologised to Nigerians who felt disappointed over her uncontrolled emotions while representing the country at the ongoing Big Brother StarGame in South Africa.

In a chat with P.M.NEWS at a special media session yesterday at Protea Hotel, GRA, Ikeja, Lagos, Southwest Nigeria, Goldie said she was sorry if Nigerians had seen another character different from the usual Goldie that thrill them as an entertainer.

“I want to tell Nigerians that I am so sorry. I am human just like everyone. I am an extremely emotional person. Everybody has two sides. What we entertainers represent on stage is different from who we are off stage. And I didn’t go into the Big Brother StarGame with any strategy. I went in there as an individual and just to be my real self. And that’s what Africa saw. I didn’t go into that house as Goldie, the performer, I was in there as Susan. Fortunately, my teeming fans got to see the human side of me and not the woman they see on stage,” she stressed.

Goldie insists that she was her true self from the beginning of the show till last Sunday when she was evicted.

“I wear my heart on my sleeve. I am brought up to be loyal and be truthful to everyone. I am not the type that plot or play schism. So, when I.K. showed me the nomination last Sunday, the discovery was shocking and my knees went weak. Every other guy had like 8, 6 and 5 nominations, but I had just two. And I was the one to leave. I felt betrayed when I discovered one of the persons that nominated me for eviction,” Goldie told P.M.NEWS.

On her 70-day run in the house, Goldie explained that she was overwhelmed by the positive lessons she learned about other African cultures. She said whatever people might say, she is convinced that she represented Nigeria well in the house as she showed to the rest of Africa that rare qualities of Nigerians.

“Nigerians are loving, caring and religious people. We have high moral standards. And all these qualities I tried to exhibit while in the Big Brother house,” she stated.

After an impressive 70-day run, Goldie, Nigeria’s last representative at the ongoing reality TV show, was booted out of the show on Sunday night. Nigeria had won the show on three consecutive occasions—Kevin Pam in 2009, Uti Nwachukwu in 2010 and Karen Igho in 2011.

After an impressive run and unexpected voluntary exit of other two Nigerian representatives, Ola and Chris, from this year’s show, a lot was expected from Goldie, as the only Nigerian left in the show. But on the contrary, many Nigerians vent their anger on her as she was seen to be on the hunt for love than the $300,000 prize at stake and honour for her father land.

On her tumultuous relationship with fellow housemate, Prezzo, The Kennis Music recording diva said the Kenyan-born rapper told her that he has been separated from his wife for two years now.

She added that she didn’t regret giving her heart to the Kenyan because she saw in him as a gentle person and he seemed to be intelligent.

“You had about 50 cameras to watch you but I had only two eyes and two ears and I believed in what I saw. But when I heard everything he had said, I was sad, but I realise that he went into the house to play a game. I have learnt my lesson and I am stronger for it,” the singer said