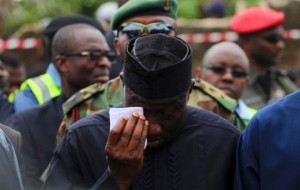 News has it that President Goodluck Jonathan today admitted, for the first time, that his government ground to a halt before it could take the first step, and he blamed Boko Haram for it.

Mr. Jonathan made the confession at the 60th National Executive Committee of the Peoples Democratic Party.

“During [the electoral] campaign, our emphasis was more on job creation, power but now what worries us most is security,” he said. “This is because you must be alive before you will eat food”

He described security as “very, very fundamental,” saying, “If you are not safe, you can’t even think of hunger because a dead person does not need food.”

The President told senior party members that although he had promised to focus on job creation and power, he had been forced to change government policy to focus on security due to the activities of the violent militant sect.

“But outside that, we would see that there are some trends, there is some hope and God willing, the issue of Boko Haram will also come down.”

Mr. Jonathan did not comment on his promise in April to vanquish the militants by June, a promise which he did not fulfill. He did not apologize for that, either.

“Did Boko Haram also persuade him not to give a damn about corruption, for which both his government and his party are the most famous?” a political analyst asked in Abuja today. “If he says Boko Haram brought him to a standstill, did they also tell him he should not provide personal example, such as declaring his assets or telling his wife it is a shame to live in Abuja and claim a job in Abuja she cannot possibly honour?”

A newspaper columnist, commenting on Mr. Jonathan’s confession, reminded SaharaReporters that it was only recently at the “Media Chat” that Jonathan told Nigerians they will start enjoying his success in 2013.

“The cows are coming home to roost now,” he said. “Boko Haram did not stop him from buying himself executive jets or budgeting nearly N1billion for feeding himself or repeatedly traveling with hundreds of hangers-on to foreign capitals to collect huge estacode payments. He is now telling Nigerians the militants are the ones stopping him from fulfilling his electoral promises!”