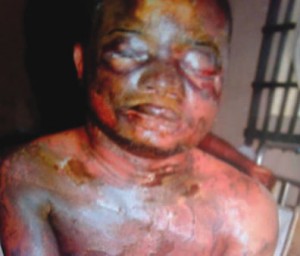 Edmund Educhukwu, a final year student at the University of Calabar, will spend the rest of his life without the use of his second eye afater his girlfriend, girlfriend, Dorothy Nkanu, a nurse, allegedly poured a bucket of acid on him following suspicion that he was dating another lady.

Educhukwu and Nkanu had lived in the same apartment, and according to Educhukwu, the nurse had once accused him of planning to dump her for another lady b, but he had reassured her “…that it was not true that people were only trying to destroy our relationship. But it did not occur to me that she was still harbouring the grudge.”

But, of that fateful day, this is what he has to say: “We even had passionate time that night and it was in the morning that she did this to me without any warning… It was when I was rounding off our early morning prayers with my eyes still closed that she tip-toed outside, brought the bucket containing the acid and poured it on me… After pouring the acid on me she taunted me. She asked me the God was I praying to that supports my plan?”

Although Educhukwu was rushed to UCTH by neighbours immediately after the incident on Friday, his right eye, face and torso were badly damaged by the acid. Currently receiving treatment at the intensive care unit of the University of Calabar Teaching Hospital (UCTH), medical practitioners at the hospital confirmed that one of Educhukwu’s eyes had been completely destroyed while the second one could be still salvaged. The nurse is currently being detained by the police in Calabar, Cross River State.