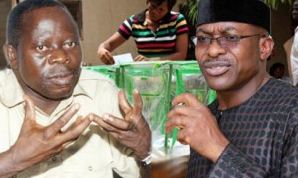 Following the general uproar described as the post election celebration of the Edo people,, the Edo State governorship candidate of the Peoples Democratic Party, Major General Charles Airhiavbere (rtd) on Sunday said he would not congratulate Governor Adams Oshiomhole of the Action Congress of Nigeria (ACN) on his re-election.

Airhiavbere who polled 144,235 votes said Oshiomhole had earlier faulted the electoral process before his declaration by the same body on Sunday.
In a chat with journalists on Sunday night at his Benin residence, Airhiavbere who thanked the people for their support during the election said it could have been easy for him to congratulate Oshiomhole but that Oshiomhole pre-empted the system that brought him.
He said,
“I won’t fully comment on the election because the acclaimed winner had earlier in the day about 1pm condemned the electoral system. He condemned the chairman of INEC for the process that has not ended”.
“That process at the end of the day declared him the winner. I will observe in the next few days before I make my comment.
“The election of yesterday (Saturday) has come and gone. I want to seize this opportunity to thank all the people of Edo State for coming out en masse to make yesterday’s exercise the most peaceful election ever experienced in Edo State. I also want to thank them for keeping faith with me. I want to seize this opportunity to PDP faithful for coming to support me.” Airhiavbere stated