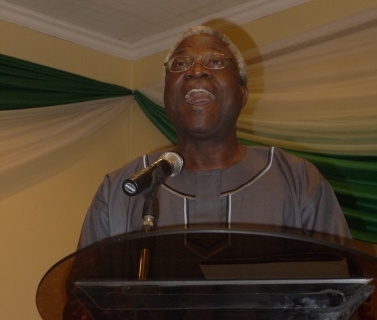 Professor Niyi Osundare, foremost playwright Prof and University don was speaking in Lagos while delivering a lecture entitled: “Why we no longer blush: Corruption as Grand Commander of the Federal Republic of Nigeria”; at an even organized by the Save Nigeria Group (SNG), led by Pastor Tunde Bakare. The event was chaired by Prof. Sagay, the legal luminary.

The university don, while lamenting the current state of the country, especially corruption which is the major problem of the Nigerian leadership, asserted that the immunity clause in our constitution has made this possible. According to him, “Nigeria is a kleptocracy. Corruption is Nigeria’s fastest growing industry. If Nigeria does not kill corruption, corruption will kill Nigeria”.

He further lamented that: “All the disasters, road accidents, Dana Air plane crash, Boko Haram violence; these clusters of calamities are traceable to corruption. Corruption killed the railway system, which would have reduced the pressure on the roads… Why is the Nigerian road full of Tokunbo cars and airspace racketing Tokunbo planes. Where are previous reports? All we have is investigation without an end, recommendation without implementation and reports that are dumped”.

The university don also pointed out that, due to corruption, attention was being shifted from the fuel subsidy scam report to the investigation of the investigators. He flayed Jonathan’s position on declaration of assets, stressing that his “I-don’t-give- a-damn attitude” to matters of probity and transparency was condemnable. In order to solve these issues, Professor Osundare suggested the strengthening of the coalition of civil society groups to fight corruption. He said: “They should mobilise people to embark on massive action and probe why few people are tirelessly rich and many are poor”.