Little or no introduction should be given to this actress that has graced many movies with her exceptional talent in acting. She has won local and international awards by acting in several Yoruba movies and soaps on television.

In an interview Iya Rainbow granted Encomium magazine, the veteran actress said she is fulfilled in her home and career. However, she regretted that she lost her husband less than 15 years into their marriage.

She told Shade Wesley Metibogun that anytime that she remembers her late husband, it memory still come fresh.
According to Iya Rainbow , her late husband was very caring and supportive before he passed on 1984.” For the past 30 years, I have not had sex, i can’t do it again till i die” She said.
“I have been the only one carrying the burden alone. He treated me like egg for the few years that we were together, most especially when I was pregnant. He will go to the market, buy things, cook for me and take care of the house. He spoilt me silly. Which man will do that for me again? At times, I look at marriages and broken homes and i wonder what really went wrong” Iya Rainbow said. 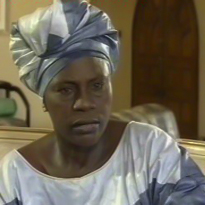