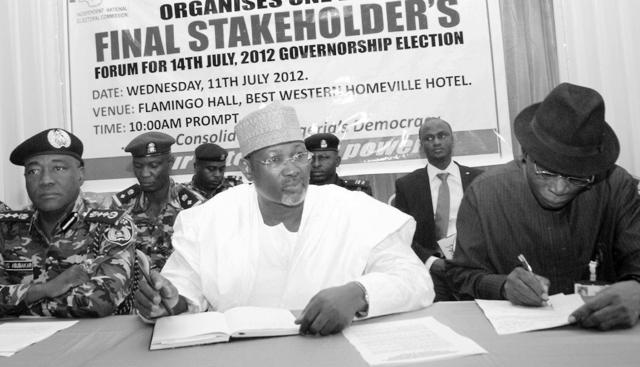 Professor Attahiu Jega, Chairman of the Independent National Electoral Commission (INEC), on Wednesday admitted the circulation of fake voters’ cards in Edo State, ahead of the July 14 governorship election.

The INEC chairman who was speaking speaking in Benin City, at a stakeholders’ meeting organised for governorship candidates in the state by INEC, said he was disappointed at the desperation of some candidates in the election. He observed that the laminated cards tendered in evidence by Governor Adams Oshiomhole, of the Action Congress of Nigeria (ACN), were fake cards. He however pointed out the perpetrators of this act of forgery have failed to capture the security features of the card.

According to him, “From what I’ve seen now, looking at these cards before me, I can confirm that they are fake. And I believe this is as a result of an abuse of privilege because we had made copies of the voters’ register available to all the parties. What these criminals have simply done is to clone from the voter register we made available to the public… But, let me assure the public that the cards I have seen can not in any way be used at our polling units because our polling officers have been trained to look out for the special PIN numbers and other security features in the valid voters’ register which will be used on the day of election.”

Meanwhile, in order to ensure that the election is not marred by electoral irregularities, the acting Inspector General of Police (IG), Mr. Muhammed Abubakar, on Wednesday night ordered the replacement of the Edo State Commissioner of Police (CP), Mr. Olayinka Balogun, with a former CP at the Force Headquarters in Abuja, Mr. Femi Adenaike, for the period of the election.