It’s official: Jennifer Lopez and Steven Tyler are leaving American Idol! “I honestly feel like the time has come for me to doing the other things I do that I’ve kind of put on hold because I loveIdol so much,” Lopez told Ryan Seacrest today on his radio show. And yesterday, Steven Tyler announced that he’s giving up his seat at the judges’ table to focus on recording Aerosmith’s upcoming album. “Idol was over-the-top fun, and I loved every minute of it,” he said in a statement. “Now it’s time to bring rock back.”We’ll miss them both! The show now has two major spots to fill, and E reports that Miley Cyrus, Nicki Minaj, Katy Perry, Fergie, andwill.i.am are all being considered, while according to People, Mariah Carey is “in serious talks” for an American Idol gig. 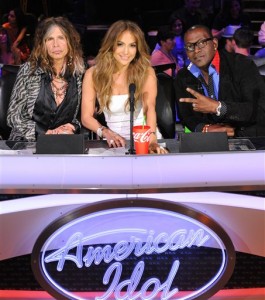