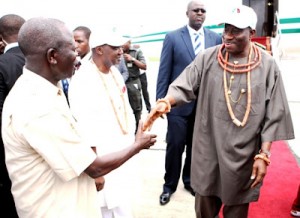 President Goodluck Ebele Jonathan congratulates Governor Adams Oshiomhole of Edo State on his re-election yesterday for another term in office.

President Jonathan also commends the Independent National Electoral Commission, its personnel and the nation’s security services for ensuring that the elections were free and fair in keeping with his administration’s commitment to continually strengthening democracy in Nigeria through the establishment of a more credible electoral system.

The President urges Governor Oshiomhole to receive the fresh mandate given to him by the people of Edo State as an endorsement of his outstanding performance in his first term and an expression of their desire for a continuation of his focused, purposeful and dynamic leadership.
He expects that the Governor will work even harder in his second term to justify the confidence in his leadership clearly expressed by the Edo State electorate on Saturday and assures him that the Federal Government will continue to give all possible support and assistance for development in the state.
President Jonathan wishes the Comrade-Governor continued good health and a successful second term in the service of Edo State and Nigeria.