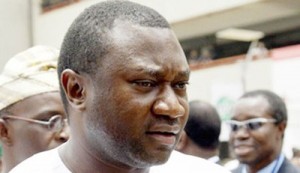 In an interview with Daily Times NG on Wednesday, Igbinedion disclosed that he had sent letters explaining his willingness and intentions to the chairman of the Economic and Financial Crimes Commission (EFCC), the Acting Inspector General of Police and the Attorney General of the Federation.

He said, “Nigerians have lost trillions, but they still go ahead to spend millions on prosecutors and yet, nothing to show for it. So I’m offering my service so there will be no more cost on the masses.

The lawyer accused Otedola of attempting to scuttle investigations into the oil subsidy and operations in the oil sector.

“He (Otedola) is the first to come out in the open to scuttle the investigation, because all he is doing is an attempt to blackmail the House (of Representatives) and scuttle investigations,” he said.

He, however, said that his focus was beyond Otedola.

“My intention is to attack those that claim to be high and mighty who have stolen our oil wealth,” the lawyer explained.

According to him, not much success has been made in the country’s purported fight against corruption, in spite of the huge budget going into funding anti-graft agencies.