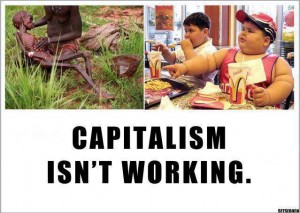 This week I saw this picture and it disturbed me very deeply. It clearly illustrates the desperate need to find a way out of the epic situation humanity is in. A situation where humans look like we will cause our own extinction unless that status quo changes. The picture is a propaganda image, I think from the left-wing occupy movement that staged large protests last year demanding an end to capitalism. It comprises an image of two extreme contrasts. On the left is a child of Africa, severely malnourished and almost certainly not far from death’s door. On the right is a similarly aged child eating at a McDonald’s restaurant and this boy’s is the opposite of malnourished, his body is so full of fat that he literally looks inflated with air. The subtitle of the picture is “Capitalism Isn’t Working.” On looking at this picture it is hard to believe that the two children are even of the same biological species. I am sure the message intended to be conveyed by this picture is that capitalism is to blame for this terrible in-balance illustrated by the difference between a starving child and morbidly obese child. I take a different message, a much deeper statement on the despair that humanity is facing.

I was born somewhere in Nigeria, and I think my biological parents are from Nigeria, yet I really know very little of Nigeria, nor Africa for that matter. I was only a few weeks old when I was adopted by my parents. At that time, devoted Baptists, they had been helping to spread the Baptist view of God in West Africa. They couldn’t have children of their own, so as their time in Africa drew to a close, they sought out a small lost soul to bring back to the United States. Their generosity saved me. Growing up a black adopted child of white parents in the Southern States of the USA was not without it’s challenges but I have, compared to many children of Africa, a sheltered safe childhood and adolescence. That childhood has given me the privilege, and I should say responsibility, to be able to contemplate my role in the world.

To try and learn about my African origins, I’ve been reading articles from Information Nigeria for a few weeks now. While I note the problems Nigeria faces, including selfish greed creating massive discrepancies in wealth of Nigerians (which leads to starving, abused children like the child of Africa in the picture), I also see the children of the West, the apparent beneficiaries of capitalism, superficially surrounded with wealth, are similarly starved of meaning and purpose. This loss to the child is often so painful, that while they are physically alive, they are close to soul-dead. Their life is so meaningless and painful that they can over-consume food to the point of becoming malnourished. To me neither children of Africa or the West, like those in the image, have had the love they deserve.

The “Capitalism Isn’t Working” statement below the picture seeks to blame humanity’s crisis on capitalism. ‘If only we didn’t support capitalism and just behaved ‘properly’ then the discrepancy between the children wouldn’t exist’. How wrong is that! I think there is a deeper truth which is that just about everyone, no matter how much they pretend or appear otherwise, is on an all out war to defend their self-worth and feel good about themselves. Capitalism is only one form of this self preoccupation, only one of the more easily visible forms of human selfishness. This selfishness can be as opaque as someone collecting as much fame and fortune as they can, by what ever means, or as subtle as pretending to help like the occupy Wall street protestors or even my parents on their mission and their adoption of me! Sadly the human situation has become all about making yourself feel good and worthwhile.

The real issue is to ask is ‘why don’t we feel worthwhile and how do we find out that we are worthwhile?’. If we could solve that then we could remove self preoccupation and selfishness, and if everyone was selfless and outward looking all the problems like human inequality would be easily solved.

The only way for us to ever to resolve this problem is for all children and humans to know what is wrong with us as individuals and as a species as a whole, and to know where we fit into the universe. It used to be that we could find an example of the ‘proper’ way to live through Christ, Muhammad and/or God(s). Historically God has been the guiding light for many, providing an ideal selfless way to behave. Christ, Muhammad and other prophets provided a way to transcend the confusion and selfishness within and provided a way to live above our human predicament. Like my adopted parents, a deferment to a God that provides purpose and meaning has helped humans live with some semblance of worthiness, when our actions, desires, weaknesses and inadequacies seem to have been pointing a condemning finger of worthlessness. But living for God and through Christ still leaves questions unanswered for me. God says he loves me, but why does he still love me if I am so selfish? So I have looked further a field for answers – particularly to science.

In the last century science has brought us forward with vast understandings of our place in the universe and of the amazing evolution of life that has created us, but it seems to me that it has also whittled away the greater meaning and purpose we found in supporting and deferring to a God or Gods. Science has demystified so much of our world to the extent that it has dismissed the whole idea of God. Yet, without apparent room for an existential God, it superficially appears that the existence of humans is without purpose and meaning. The critical question of “Is there a God?” has switched more to “Is there meaning or purpose to our existence?”.

To find an answer to our meaning and purpose we need to bravely take what science has provided and fill in the gaps of our knowledge. We don’t need more imposed dogmatic movements, like the occupy movement, we need to know the answer to “Is there a God?” and find our purpose in life. How do we reconcile the accepted ideal truths of religion and God with the fact that we are out of sync with these ideals? Only finding this answer, will we begin to put an end to the terrible suffering of  he children illustrated in the picture, and to all current and future children.

I don’t even know if it is possible for humanity to get out of this rut, but I have come across some amazing insightful, and best of all hopeful, theories by a biologist named Jeremy Griffith. He seems to explain our condition and provide a path (the only path?) out of this mess. A good introduction is to read Griffith’s answer to the question: “Is there a God?” 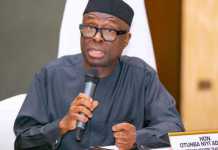 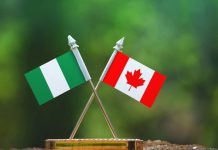