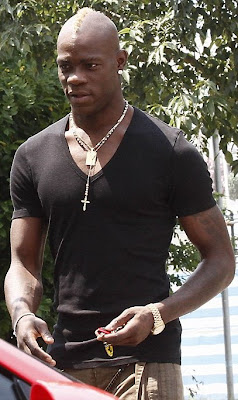 Obviously Mario Balotelli isn’t excited about the news of his ex-girlfriend’s pregnancy for him, contrary to what she told the press. This is what the 21 year old Italian footballer had to say:

‘A few days ago I learned from third parties that Raffaella was pregnant. So I decided to contact her and it was only after I had questioned her that she confirmed it was true. I am very disappointed as I don’t think it is right that I should learn this after four months.’
‘I will accept full responsibility after a paternity test. I don’t really want to speak publicly about my private life but I find that I have to explain once and for all, the nature of my relationship with Raffaella Fico. We split up in April and since then we have not seen or spoken to each other. I had nothing more to do with Raffaella’s life and she had nothing more to do with mine.’
Raffaella knew then and she knows now, that I have no intention of getting back together with her. Out of respect for her I have never spoken about our relationship, even when things have been said that are not true.”I don’t understand why Raffaella did not contact me to tell me about this – and I also find it disappointing that money is already being made from this with photographs and interviews being bought and sold.’
‘I believe that Raffaella is already famous enough without having to exploit this story for publicity. This is the last time I am going to speak about this and I have no intention of responding or replying to anything Raffaella writes or says.’