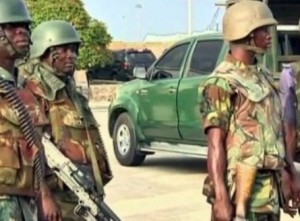 Villagers living in the Mahanga, Kakuruk, Maseh and Shong 2 areas of Barkin-Ladi and Riyom Local Governments in Plateau have been ordered to immediately relocate from the affected areas within 48 hours.

This order was given on Saturday by the Special Task Force (STF), the security outfit charged with maintaining peace in the volatile state.

“The inhabitants of the affected areas are to vacate immediately with their property,” a statement signed by STF spokesman, Capt. Salisu Mustapha, read.

The statement said that a “military operation” was going on in the affected areas located in Barkin-Ladi and Riyom Local Governments. It also advised residents of neighbouring settlements such as KuraFalls, Kuzuk, Sharuk, Rim of Gashish Districts not to panic.

“Residents of such areas should just be very careful of their movement within the area and avoid places of military operation until further notice,” the statement added.

It also advised people to report any suspicious movement or activities in their areas.

In an early reaction to the military order, a resident of one of the villages said it was wrong for the STF to command them out of their ancestral homes without providing alternatives.

“We know no other home,” he said. “Where do they want us to go? Why must they treat us as if we are foreigners in our own country.”

The villager indicated that he and his kinsmen might disregard the STF’s order “since we have no were to go”.

The News Agency of Nigeria (NAN) reports that the military action may have resulted from the incessant attacks by gunmen on some communities in the areas.

It would be recalled that Senator Gyang Dantong and Mr Gyang Fulani, Majority Leader in the Plateau House of Assembly, lost their lives in the ensuing stampede after gunmen attacked them at Maseh village during a burial ceremony of victims of an earlier massacre in the same area.