Mr Gabriel Gbelelola, a 49-year-old civil servant has dragged his wife, Bisilola, to an Ikorodu Customary Court in Lagos, seeking dissolution of his 13-year-old marriage.

“My wife keeps late nights and at times she does not come home at all, she pays no attention to the family again,” he said adding that she usually receive calls from “different men in the night and she has denied me of my séxual rights for a while now. She is not submissive at all and when I report her to her family, they usually take side with her.” 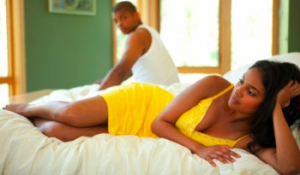 But Bisilola, 42, a trader, denied the accusations and urged the court not to dissolve the union. “My husband lied about his genotype before we got married, he was AS; I got to know when our first child died because he had sickle cell,” she said.
“My husband had also told me that he would marry another woman that was why he wants to divorce me. I pray this court to help us settle this matter; I don’t want to leave my husband,” she added.

The President of the court, Remilekun Adesanya, observed that there was still room for reconciliation in the marriage. She adjourned the case till July 18 for possible reconciliation.