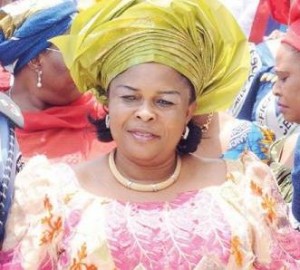 Following the widespread outrage over the appointment of the first lady of Nigeria, Patience Jonathan as a Permanent Secretary in Bayelsa State, Mrs. Jonathan has said she will be performing her duties as a Permanent Secretary but with no salary earnings.
Speaking through her spokesperson, Ayo Osinlu in an interview with Premium Times, Mrs. Jonathan said she will not be relocating to Bayelsa state to perform the duties of a permanent secretary, in line with her new appointment.
“She is on leave of absence,” Mr. Osinlu said. “She is not going to function in the office of the permanent secretary in Bayelsa state.”
Ms. Jonathan however, is apparently delighted at the appointment as her spokesman argued that she had no cause to publicly accept or decline the appointment.
“It is a civil service position,” Mr Osinlu said. “She is a staff of the Bayelsa state civil service.”

Mrs Jonathan will also not collect any pay for the office, Mr Osinlu said insisting that “It will be illegal for her to draw salary from the office.”
The president’s wife, who left the Bayelsa state civil service 13 years ago after her husband became the deputy governor of the state, was elevated to the position, usually reserved for senior civil servants.
However, Governor Seriake Dickson said he made the appointment in line with the constitutional powers conferred on his office because she was on “leave of absence” and not retired from the state’s civil service.