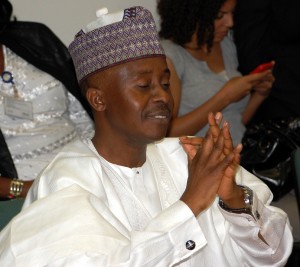 The Deputy Force Public Relations Officer, of the Nigeria Police, Frank Mba, while speaking on the release of audio recordings of conversation between the two allegedly involved in the bribery scandal, has advised Nigerians not to be carried away by the release of the audio, saying that it was not enough evidence to prosecute Lawan.

The police officer also assured that the force will not interfere with the ongoing investigation by the Ethics and Privileges Committee of the House of Representatives as long as the committee did not do anything that would jeopardise police investigations: “We are not interested in what the committee is doing… we are not monitoring them and would not interfere as long as they don’t do anything that could jeopardise what we are doing.”

Nigerians are banking on the police too, to make sure justice is served. Shortly after the opening of the FaroukGate saga, certain police officers were accused of allowing the honorable to stay away from detention when he was supposed to be in detention. Nigerians are also asking: why has the police been unable to make Farouk Lawan to produce the marked money which he allegedly collected; or why has he not been able to come up with a concrete explanation about the whereabouts of the said money?