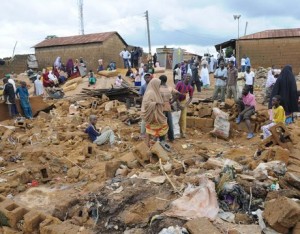 Over 35 people have been confirmed dead; more than 15 declared missing and more than 200 houses destroyed in Jos, Plateau State capital on Sunday night, when a rampaging flood caused by heavy rainfall was reported to have forced a dam to overflow. The rain started in the evening on Sunday and continued till past midnight, also making many rivers to overflow their banks.

The flood affected areas such as Rukuba Road, Angwan Rogo, Angwan Rukuba, Rikkos, Gangare and Farin Gada, among others. By Monday morning, about three cars were seen submerged in water below the Farin Gada Bridge. A 90-year-old woman and a three-month-old baby were among the victims.

Manasie Phampe, the head of the Red Cross in the state has confirmed the incident, saying: “We have recovered the bodies of 35 people that drowned in the overnight flooding. About 200 homes have either been submerged or destroyed. Rainwater and water from the Lamingo dam which overflowed swept across several neighbourhoods in the city. We are still searching for more bodies as many people have been declared missing.”

Also, officials of the National Emergency Management Agency (NEMA) have also revealed that they are working, trying to compile a list of those missing or killed.