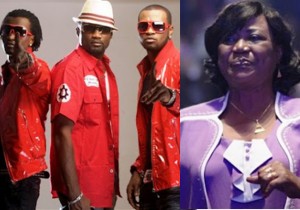 Publicist of P-Square, Square Image Associates (SIA) confirmed that the remains of Mrs Josephine Okoye, the mother of Peter and Paul of P-Square has arrived Nigeria from India.

It was said that  Mrs Okoye’s corpse arrived Lagos yesterday morning from India, where she died.

It was also said by the SIA that her remains have been deposited in a Lagos mortuary, and the families are still meeting on burial plans.

Her last publicised outing was in 2011 at the album launch of P-Square in Lagos. Mrs Okoye was reportedly influential in the career of her children.