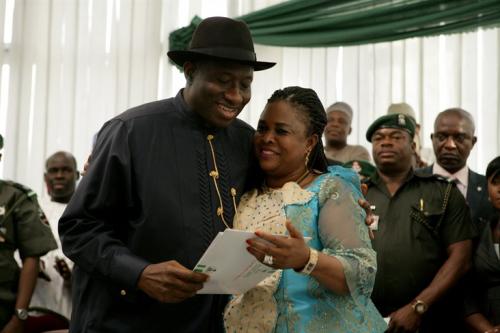 Bayelsa State Head of Service, HOS, Gloria Izonfuo, is yet to assign a ministry to the wife of the President, Patience Jonathan, almost a week after she was sworn in as a permanent secretary in the state civil service.
Investigation by our correspondent in Yenagoa yesterday showed that the other 18 permanent secretaries appointed alongside the First Lady by Governor Seriake Dickson have assumed duty in their new ministries, where they held meetings with their directors, heads of department and staff.

The new appointees were sworn in amid tight security on July 21 in Yenagoa by the governor.

But when contacted on phone, Mrs. Izonfuo refused to comment on her inability to assign a ministry to the President’s wife.

However, a top government functionary, who craved anonymity, said the First Lady might not be able to perform her duty as a permanent secretary because of her busy schedule in the Presidency.