I am not by any means saying the Balotelli family in Ghana is fraud but the way things are going with his family in Italy and those back home also settling in, things are beginning to look like they are desperate…

How can a single family member be all of a sudden exceptionally important like this? Money talks right?

Below is the report on the issue 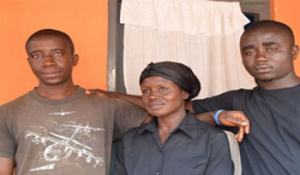 The Ghanaian extended family of Manchester City striker Mario Balotelli has joined persistent pleas from his biological parents that he should return to them.

Mario is a top striker whose transfer value has soared to £52million and though he was born to Ghanaian parents, Rose and Thomas Barwuah, on August 12, 1990, he was adopted by foster parents at age three because of medical reasons.

He was born in Palermo, a city in Southern Italy and was adopted by Italians.

There are two versions to the story of how Mario got adopted by Italian foster parents, the Balotellis.

Mario said in an interview that he was abandoned in a hospital by his biological parents, the Barwuahs.

They have denied this claim and insist that because they did not have enough money to foot his consistent medical bills due to his health conditions, the Balotellis offered to adopt Mario on a temporary basis but never brought him back.“At first we were not sure but we decided it was probably best for Mario. We saw him every week and we all got on really well.

“We thought that at some point, once things had sorted out, Mario would come back to us.

But instead, every time we tried to get him back, the Balotellis kept extending the foster time,” Mr. Barwuah told the Daily Mail in UK.

The Barwuahs have since called on Mario to return to them but he rather took an Italian citizenship when he turned 18 and actually changed his surname to Balotelli.

Mario has ignored the ‘return home’ call and rather continues to shock the world with the two things he knows how to do best: playing amazing football and acting crazy.

But there may be hope for the Barwuahs as the Daily Record reports that Mario’s extended family back home in Konongo, Ghana, has added its voice to pleas for Mario to return home though it has never set eyes on him.

The reports quoted Alex Barwuah, 30, Mario’s uncle: “We are all extremely proud of him.

It was wonderful when he scored both goals and we were ecstatic.When he pulled his shirt off and showed off his chest after scoring my friends made me do the same thing.

It made me feel closer to him. I’ve never met Mario but I feel very happy when I see him on TV.

We watch him whenever we can. I’m so proud he is part of the family.

“I feel sad though we have never met, and that my father never saw his grandson…my father watched every game he could showing Mario and longed to meet him, but it was not possible…I hope now Mario comes to see us and gets to learn about his ancestors.”

Mario’s grand-dad, Nana, a retired bus driver, died not long ago. Mario had once sent him a baseball cap with his signature embroidered inside as a gift.

The reports also said Kwaku Awuah, Balotelli’s grandfather on his mother’s side, also wanted to welcome his grandson “home”.

Kwaku, 80, said: “It’s pathetic to have a superstar as a grandson but to have never set eyes on him…It makes me so sad whenever I see him on TV or read about him in the papers…I’m not interested in his money.

I just want to tell him to come back to his roots because, as the saying goes, there really is no place like home sweet home.”

It said Akosua Osaa Barwuah, Mario’s aunt and his father Thomas’s sister, is also upset that she has never been able to meet her nephew.

“I feel so sad whenever I see him on TV…My brother Thomas sent me Mario’s picture when he was about three.

I have a nephew of this calibre and I’ve never set eyes on him,” she said.