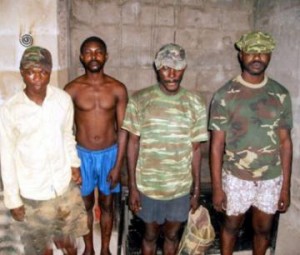 Robbers terrorizing the residents of towns and villages along the Lagos-Ibadan Expressway have been arrested.

They were said to have been arrested by Special Anti Robbery Squad, SARS, Lagos State Command and the police recovered 900 live bullets, 30 cartridges and five AK 47 guns from their hideout.

They were arrested at Ado-Odo in Otta, Ogun state, southwest Nigeria, on their way for a robbery operation.

Wale identified other members of the gang as Dada, Akin, Mutairu and Chicago who led the police to arrest other suspects.

Wale said that they met their waterloo after Chicago was first arrested by the police about a month ago.

He said during interrogation, Chicago confessed and told the police the names of their members, how they operated and where and how they could be arrested.

Based on the information provided by Chicago, the police laid an ambush for the gang and arrested the three suspects while Akin who was with them tried to escape. In his attempt to escape, Wale was shot on his right leg.

During interrogation, Wale told reporters that he and members of his gang have been into robbery operations over the years and some have died while new members were recruited.

He said that their problem started when a policeman identified them and contacted SARS.

The Lagos State Commissioner of Police, Mr. Umar Manko who paraded the suspects said that the police were making concerted efforts to reduce drastically the incidents of robbery in the state.