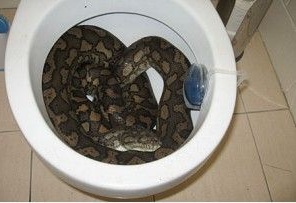 A 74-year-old Pensioner from Schwanstetten in southern Germany  could believe her eyes when she lifted  her toilet sit and found a live Python in her Toilet, immediately she called the police, who tried to flush the serpent from its hiding place.

“However, the reptile was in no mood to show itself to the officers so the fire brigade was called in. They opened a manhole in the garden and were able to remove it from the plumbing,” a police statement said.

A snake expert was then calledto access the situation, and Sse identified the serpent as a two-year-old royal python, normally not dangerous to humans, and offered to take it home until the owner steps forward.

“Until we have cleared up whom the reptile belongs to, the police have registered it as a lost item,” concluded the police statement”