Home General News World news PHOTO:Man Brutally Beats and Stabs His Wife For not Allowing Him To...
Facebook
Twitter
WhatsApp

A 21yr old Mutorashanga man( small ferrochrome mining town in Mashonaland West province in Zimbabwe),  has been jailed for four months for beating up and stabbing his wife with a knife after she objected on him marrying a second wife

The convicted, whose name is Ariyeri Apitoni was  on his own plea of guilty to the charge of contravening section 3 of the Domestic Act Chapter 5:16 when he appeared before magistrate on friday.

The court heard the couple had quarreled many times over the husband’s plans to marry a second wife.

Prior to the incident, the wife had abandoned her home after her husband insisted he would pursue his marriage plans of marrying a second wife and was now staying with her parents.

The State case was that on June , Cecilia Chifamba (22), who was on her way to visit a sick uncle at Munaka Farm, met her estranged husband who forcibly took her clothes and ordered her to join him back home.

On the same day at around noon, Apitoni proceeded to his in-law’s residence where he intended to “sweet-talk” Chifamba back home but she refused.

This incensed Apitoni who drew out a multi-blade knife from his pocket and stabbed the complainant once in the back before fleeing.

The wife sustained a deep cut as a result of the attack, the court heard.

The magistrate sentenced Apitoni to a four-month prison term or $300 fine. 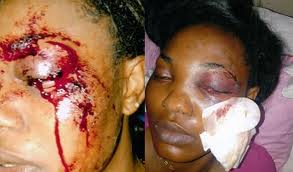