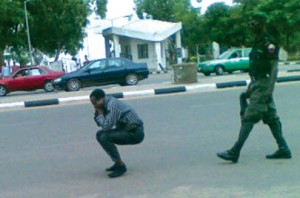 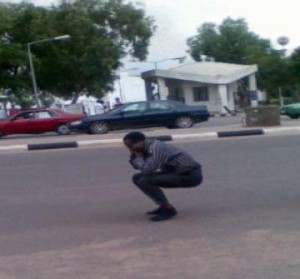 A middle-aged lawyer, Nnajite, yesterday, was ordered to frog-jump for five minutes in front of the court premises by Mr. Adewunmi Makanjuola of an Osun State Chief Magistrate’s Court sitting in Osogbo,  as a punishment for disrupting court proceeding.

Makanjuola, who was presiding over a case of alleged rape of a 11-year-old pupil, was apparently disturbed from the noise by Okobie, who was having a conversation with two other people suspected to be his clients on the court premises.

Worried by the development, the magistrate sent the court orderly to warn the lawyer to desist from making noise. But the man failed to heed to the advice of the judge.

Provoked by the action of Okobie and his two clients, Magistrate Makanjuola ordered the court orderly to bring the trio before him and asked them to make a choice on whether to be docked for contempt of court or to frog-jump for five minutes for their punishment.

It was at this point that Okobie and his clients chose to frog-jump. Makanjuola then asked the court orderly to sanction them by engaging them in a five-minute frog-jump.

The magistrate stressed that the action of the lawyer and his clients had put the court in disrepute.

The punishment attracted many passers-by including workers of the court, suspects to the scene. Not a few people took pity on the lawyer while others made mockery of him while the punishment lasted.

After serving out the punishment, Makanjuola warned them to desist from making noise on the court premises, adding that the fact that Okobie was a lawyer should not give him the impetus to disrespect the court. He said: “Even if the court is not on, you should have respect for it and for the government, not to talk of when the court is in progress. Mr. Okobie, sorry for treating you like a novice.”