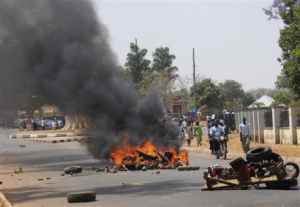 Different versions of the story about the latest attack in Plateau State which left at least two government officials dead have continued emerging. Information coming from government quarters concerning the massacre appears not only to be different, but also contradicting what was earlier said.

First, contrary to the early declaration that two lawmakers were shot dead during the attack which was reported to have been carried out by Fulani attackers (another changing story, now that the Boko Haram are allegedly claiming responsibility), the commander of the Task Force, Major General Henry Ayoola, have declared that the lawmakers were not shot dead.

According to the Ayoola, “… during the burial of the diseased persons of Maseh Village, there was sporadic shooting from the range of the hills surrounding the area which led to a stampede, in the course of which three honorable legislators slumped and were rushed to the hospital… Unfortunately, Senator Gyang Dantong (Plateau North Senatorial District) and Hon James Gyang Fulani of the Plateau State House of Assembly died, while Hon Simon Mwapkon of the Federal House of Representatives survived and has been discharged.”

In the account given by the surviving lawmaker too, the story remains the same. According to him: “… we were at the burial ground preparing to bury the victims of a massive attack on the villages when the gunmen started shooting, forcing everyone to abandon the corpses and scurry to safety. Everyone was racing away, but the Senator slumped first and there was a rush to take him”. Certain media releases have explained that the government might be doing this in order to ensure that the Boko Haram is not listed as a Foreign Terrorist Organisation (FTO), an eventuality which will tarnish the image of the country abroad.