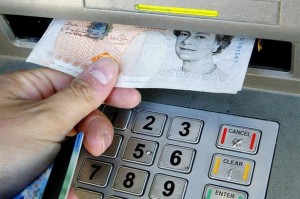 A crowd quickly gathered at a faulty ATM which began giving out double the money customers requested for.

Arguments broke out among customers who wanted to use the machine.

Police had to be called in to calm the crowd and restore order till the Bank’s staff resolved the issue.

“The incorrect dispensing of cash is not a police issue, but we remained on scene until staff from the Lloyds bank arrived and turned off the cash machine.” A police spokesman said.

“Word got around pretty quickly. My friend asked for £40 and the machine gave out £80.” Emma Hutchinson, from Ipswich said.

Hutchinson added that she went to see if the rumour was true but decided not to withdraw any money herself.

It is not clear how much money the bank lost, or if it will be able to recover the funds.

About 30 people are believed to have benefitted from the glitch.

A spokesman for Lloyds TSB said: “For a very short period of time, the ATM at Nacton Road was misdispensing cash whilst the branch was closed.

“The machine was put out of service. We apologise for any inconvenience caused.”