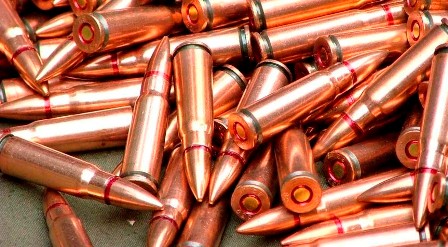 At least 8,500 rounds of ammunition were recovered from smugglers when a Volkswagen bus loaded with goods from Seme border, was on Wednesday intercepted by the surveillance team of Trade Fair Division, under Area ‘E’ Command at the Trade Fair Complex in Lagos.

The suspects who would pose as traders at the popular Onitsha market usually concealed the ammunition inside their goods, using this method to evade security checks at the border. But luck ran out of this group when their vehicle was reportedly taken to the station, based on suspicion. Afterwards, a startling discovery of 8,450 live cartridges, concealed inside cartons of T-shirts was made, when the vehicle was searched.

While parading the suspects before journalists at the command headquarters, Ikeja, the Command boss, Mr Umar Manko, revealed some of the items recovered from the smugglers such as “…a navy warrant officer’s WO2 uniform, identity card, beret, badges and shoes of a retired naval officer, who was in charge of the vehicle, at the time of arrest…”

He also informed that, “Investigation was extended to Onitsha, Anambra State, leading to the arrest of one Udeh, who is one of the owners of the consignment. He offered the sum of N61,200 to the police to influence the release of the consignment and was arrested in the process”. However, when the retired naval officer was questioned, he denied knowledge of the contents of the cartons, saying he was only called upon to convey the goods to Trade Fair by one Ejike.