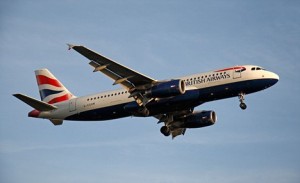 An Arab prince was thrown off a plane by police officers armed with 50,000 volt Taser guns because he was drunk.

The 28-year-old, believed to be a close relative of Bahrain’s King Hamad bin Isa Al Khalifa, had boarded a Boeing 777 at London Heathrow airport when he began shouting and complaining about the poor service on the BA125 flight to Doha, Qatar via Bahrain.

Members of the crew were forced to call the police who arrived with stun guns after he stormed the flight deck and refused to go back to his seat, The Sun reported.

The billionaire was then dragged off the plane and taken to a West London police station near the airport where his DNA, mugshot and fingerprints were taken.

A police spokeswoman confirmed the incident had happened.

She said: ‘We were called at 10.34am on Sunday July 22 to an outward bound flight to Doha, Qatar, via Bahrain at London Heathrow after a man was reported to be causing a disturbance.

‘A man who is 28 was arrested for being drunk and disorderly and failing to comply with the instructions of the cabin crew. He was taken to a west London police station and bailed to a date in September.’

Human rights campaigners have criticised King Hamad in the past whose regime has been accused of violently repressing pro-democracy activists.