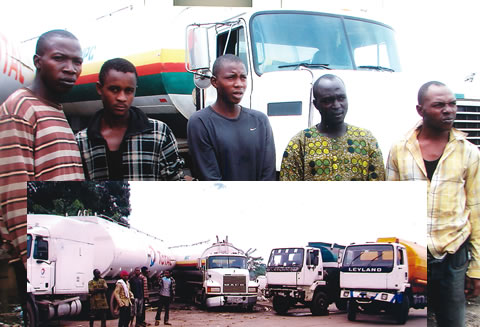 A suspected pipeline vandal, Ismaila Sulaiman, has said rich Nigerian men are behind vandalisation of pipelines and theft of petroleum products.

Sulaiman, a member of a gang that specialised in stealing petrol from vandalised pipelines in Ogun and Oyo states, said this when he was arrested with four others by policemen attached to the Force Headquarters.

Explaining their modus operandi, Suleiman said as soon as a strategic NNPC pipeline was spotted, they would drill through the main pipeline and with the aid of valves easily transfer the petrol to their tankers.

“It is a very big business sponsored by very rich Nigerians. We load more than 10 tankers before we relocate to another spot for fear that law enforcement agents might trace us. I do not know how they got wind of this deal because we normally have a very strong security arrangement,” he said.

Sulaiman said they relocated to Oyo when the security in Lagos became too tight for them to operate freely.

PUNCH Metro learnt that the policemen, who are operatives of the Inspector General of Police Special Task Force on Anti-Pipeline Vandalism Unit, arrested the suspects and impounded five tankers loaded with petrol.

Assistant Commissioner of Police, Friday Ibadin, who is in charge of the Task Force, said the suspects were caught red-handed by the police during their regular surveillance of the area.

He said, “The police acted on an intelligence report that a major syndicate had been lifting several tankers from the bush. Detectives led by Oyo Sector Commander, Xpress Onioigue, successfully raided the areas and recovered five tankers filled with petrol.

“Meanwhile, we are on the trail of the kingpin known as Olugbenga who we gathered is being sponsored by some influential Nigerians. The police appreciate the help of residents of these communities who have tremendously helped to reduce to its barest minimum the vandalisation of Nigerian National Petroleum Corporation pipelines.”

Adamu, another suspect, said he was introduced to the business by one Alhaji Abdullahi and is usually paid N180, 000 per trip.

Adamu, an indigene of Taku in Bauchi State said, “I am a petrol tanker driver and my boss is based in Bauchi. Whenever I’m idle, I use the tanker for hire, transporting fuel to where it would be sold.

“On that day, Abdullahi informed me that there was a job and we agreed that he would pay me N180, 000 and also fuel the vehicle. He bought 100 litres of diesel for my vehicle and I took two of my boys along with me.

“When we got to the place, they loaded my tanker, but when we were about leaving the police arrested us.”

On how they dispose of the product, Nasiru said, “All I do is to deliver the product to the petrol station that I am directed to. My tanker has Total written on it; therefore no one would suspect that the product is stolen. I do not know how much these products are sold, my duty is to deliver and get paid.”

He also urged residents residing in areas where pipelines are located to report suspicious activities to the police.