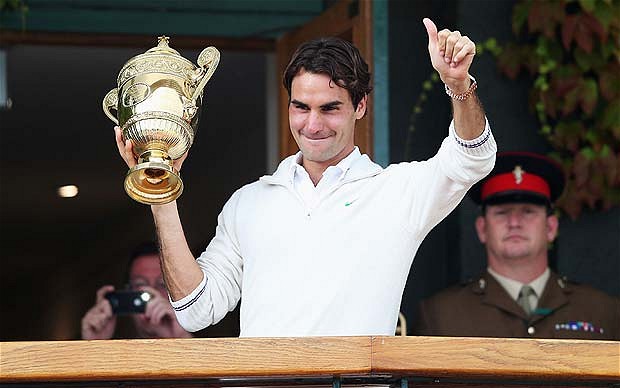 Roger Federer, on Sunday beat Andy Murray to win his seventh Wimbledon title and 17th Grandslam. In achieving both, Federer has earned separate entries in the tennis record books, tying William Renshaw and Pete Sampras on seven Wimbledon titles and matching Sampras’ unsurpassed tally of 286 weeks at number one. He is guaranteed to stretch that to 287 weeks in seven days’ time.

Contrary to the widely-held belief that his career was in irreversible decline, his grand slam title prospects slim and chance of getting to number one again gone, the thirty-year-old has shot himself back to the top as world number one. The developing rivalry between Novak Djokovic and Rafael Nadal was perceived to be pushing Federer out to the fringes, but he has been terrifically consistent on tour since last year’s US Open, and the latest Wimbledon title justified his unflappable self-belief.

Before the four-set triumph over Andy Murray yesterday, it had been two and a half years since his last major title, when Murray was also the victim at the Australian Open.

After yesterday’s victory, looking at his barren grand slam run, the humble 30-year-old from Switzerland said: “I see it more as a stepping stone, a period I had to go through as well. To win 90 per cent of my matches throughout the year is impossible every single year. So you’re always going to go through ups and downs.